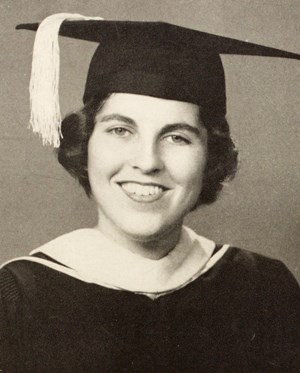 Betty Kerby Peppard (1930-2013) was the daughter of Elizabeth and Ed Kerby. Her Father, head golf professional at Fairlawn Country Club in Akron, Ohio for 41 years. Betty grew up following her Father around the pro shop, driving range and golf course. She started playing golf at an early age, calling Akron her home for most of the school year. During the winter months, the family would live in St. Petersburg where her Father worked at clubs as a golf pro. Betty met or knew all 13 of the original founders of the LPGA. Patty Berg was a lifelong friend.

Betty’s lifelong involvement in Golf was threefold, as a competitor, advocate and USGA Rules Official.

Peppard attended Barry University in Florida and played golf as an individual since the school did not have a team. In 1950 Peppard was co-medalist in the Women’s National Intercollegiate Tournament at Ohio State University’s Scarlet Course.

Peppard was incredibly involved with the Junior golf program at Brookside CC and taught several of her children to love the game. Betty served on the board of the Ohio Girls Golf Foundation, greens committee at Brookside CC and volunteered at Clearview Golf Course with 2007 Hall of Fame inductee Renee Powell. Two of her sons, Donny and Tom, played in the Ohio High School State Finals. Tom continues to be a professional competing on the Long Drive Tour. Betty’s daughter Mary serves on the boards of the LPGA Amateurs-Canton Chapter and the Women’s Ohio State Golf Association.

Peppard officiated for nearly 20 years as a volunteer for the USGA, WOSGA, and Stark County high school sectional championships. She did what many have not accomplished and achieved a perfect score on the USGA/PGA Rules of Golf Workshop test and highlighted her officiating career by working the 2010 US Women’s Open at Oakmont CC.

Peppard is a member of three Hall of Fames: Barry University, Summit County Sports, and Stark County Sports. In 2002 the WOSGA created the Betty Kerby Peppard award to recognize individuals who have made a significant contribution to women’s Amateur golf in the state of Ohio. Betty was the first recipient.