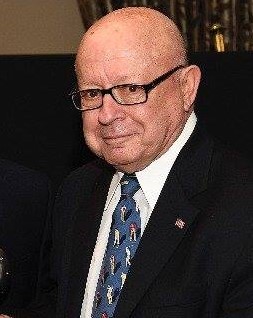 George is a native Clevelander whose attendance at Ohio State encompassed the years of Nicklaus, Weiskopf and Kepler. While at OSU, George majored in journalism where he was sports editor, managing editor, and finally editor of the Lantern.

It was in 1961 while a freshman, that he first met Kaye Kessler. George’s early career was as an education reporter and in this endeavor, he won an Ohio High School Bell award for educational writing. He was also recognized by the Columbus Jaycees for significant contributions to education.

In 1973 he joined the Cleveland Plain Dealer as a sports writer. In 1982 he won the Golf Writers Association of America award for the best golf story of the year on JoAnne Carner’s victory in the World Championship of Women’s golf at Shaker Heights Country Club.

He was made an honorary member of the Northern Ohio PGA in 1992 and is now the chairman of their Hall of Fame Committee.

George and his wife Carol have four children and four grandsons.