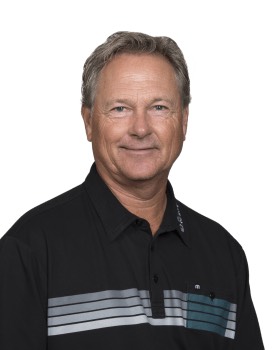 John Neuman Cook was born October 2, 1957, in Toledo Ohio, but grew up in Southern California. He attended Miraleste High School in Rancho Palos Verdes, graduating in 1976. While in California, John was mentored by 1964 U.S. Open and World Golf Hall of Fame member Ken Venturi. He was offered a golf scholarship to The Ohio State University, and was personally advised to accept by OSU alums and golf legends Jack Nicklaus and Tom Weiskopf. John was a member of the Buckeyes’ 1979 NCAA Championship team, which also included future PGA Tour star Joey Sindelar.

The team national championship at Ohio State was just one of many impressive titles claimed by John during his stellar amateur career. He won the California State Amateur in 1975, and added two Ohio State Amateur victories in 1978 and 1979. Also among his prestigious amateur victories were the 1978 and 1979 Sunnehanna Amateurs and the Northeast Amateur in 1978 and 1979. John’s crowning achievement as an amateur came in 1978, when he won the U.S. Amateur Championship at the age of 20. He nearly won it again in 1979, reaching the final match before falling just short to Mark O’Meara.

It didn’t take long for John to continue his winning ways at the professional level. His first PGA Tour victory came in 1981 at the rain-shortened Bing Crosby National Pro-Am, where he won a five way sudden death playoff that included Hale Irwin, Bobby Clampett, Ben Crenshaw, and Barney Thompson. He defeated Johnny Miller in a playoff to claim his second tour victory at the 1983 Canadian Open. John’s most productive PGA Tour season was 1992, when he won three events, finished second in the British Open, moved into the top-10 of the Official World Golf Rankin for the first time, and was named the tour’s comeback player of the year. His 11th and final PGA Tour victory came in 2001, when he won the Reno-Tahoe Open at the age of 43.

John became eligible to compete on the Champions Tour in October 2007, and he won in just his second start at the AT&T Championship. A year later he successfully defended his title for his second win on the circuit. John still competes on the Champions Tour and has claimed nine victories to Date. John also has six international wins to his credit, bringing his worldwide total to 26 titles.