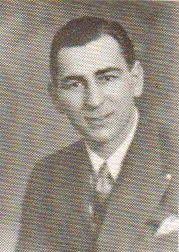 Kermit Blosser, Ohio University’s winning-est coach has played or worked for that university for parts of eight decades and has been involved with more than forty championship teams.

Kermit was born in Enterprise, Ohio in 1911 and enrolled at Ohio University in 1928. He played both offense and defense on the football team, won a NCAA wrestling championship in 1932, served in World War II as a gunnery officer on a warship, and was hired by Ohio University as a n assistant football coach in 1946.

He was inducted into the Bobcats second Hall of Fame class in 1966, and given the key to the city of Athens on “Kermit Blosser Day” in 1976.

Blosser was made a member of the charter class of NCAA Golf coaches Hall of Fame in 1980, and won the last of his eighteen MAC Golf Championships in 1981.

Although retiring in 1988 as golf coach after forty-one years on the job, he continued to publish the Ohio University golf newsletter until 1998.

Dow Finsterwald, who won a dozen PGA events and the 1958 PGA Championship, was Kermit’s most accomplished protégé. Even though legally blind for twenty-four years, he still manages to play an occasional round of golf and keep up with what is going on in the world of golf.

Perhaps one of the most accurate measurements of his attachment to Ohio University is not a trophy or award, but the adulation he recieves when people say, “Kermit, you’re the man.”