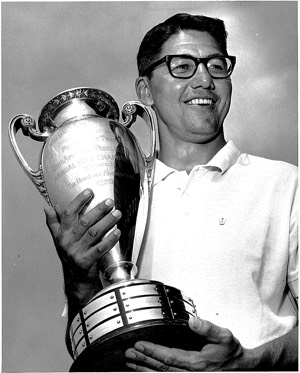 Lalu Sabotin’s road to the Ohio Golf Hall of Fame ran straight through the boxing ring. Born Auriel Jibotian on January 12, 1930 in Warren, Ohio, Lalu changed his name for boxing. He made his Golden Gloves debut in 1946, winning 147 pound championships in Youngstown and Cleveland. He repeated these feats at 160 pounds in 1948 and was named the Cleveland Golden Gloves “Most Outstanding” fighter. Lalu compiled an amateur record of 117-12, then served in the Army for two years before embarking on a professional fighting career. Turning pro as a natural lightweight, Lalu made his debut in Akron on November 16, 1949, knocking out Mike Lyden in the second round. Perhaps his most notable pro bout occurred in Brooklyn on December 29, 1952, when he lost by TKO in the fifth round to legendary fighter Floyd Patterson. Lalu finished his pro career with a 21-11 record, including 10 KO’s.

Boxing’s loss was golf’s gain, as Lalu then went on to build a very impressive amateur resume. He was the first stroke play champion of the Ohio Amateur in 1967, and also won the Ohio Public Links Championships in 1963,1966,1968,1970 and 1971. Lalu is also a past champion of the Youngstown Open and the West Virginia Tri-State tournament. He won multiple titles in Ohio as a senior and out of the 152 tournaments entered over the course of his amateur career, Lalu claimed victory in 90 of them.

Lalu Sabotin was a graduate of Warren G. Harding High School, and lived in Warren for 60 years. He served his community as a longtime fireman with the Warren County Fire Department, from which he retired having attained the rank of Captain. Lalu passed away on February 15,2005 and was survived by his wife, Norma and his daughter, Lynda.