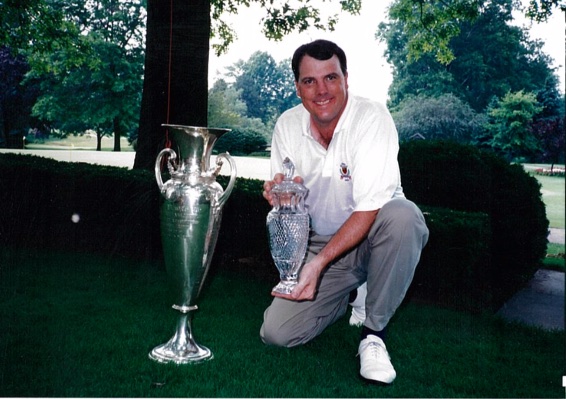 Bob Fairchild’s father introduced him to the game at the North Olmsted Golf Club when he was nine years old, and by the age of 12, in Bob’s own words, he was “really hooked”. He gained his early competitive experience by playing in many junior tournaments and as a member of the Bay Village High School team. He then headed south to compete for Miami Dade Community College, where he and his teammates won the National Junior College Championship. Among those teammates was Bruce Fleisher, the 1968 U.S. Amateur champion and future winner on the PGA and Champions Tours. Bob moved on to attend Northwood Institute in Midland, Michigan, where he won several college tournaments and several as team captain.

As a 43 year member of the storied Canterbury Golf Club in Beachwood, Ohio, where Bob has claimed 16 club championships. He qualified for the U.S. Amateur Championship 6 times, and the U.S. Mid-Amateur 5 times. Bob is the 1993 Ohio Amateur champion, and won the Northeast Ohio Amateur in 1993, 1997, and 1998. He partnered with professional Charlie Wood to claim the 1981 Pete Dye National Pro-Am, and won the Anderson Memorial at famed Winged Foot Golf Club with Bob Lewis Jr. in 1989. Bob and Randy Reifers took the 1980 Ashland Am Am title, and he has also won the Henry Picard Cup several times, along with the 2006 Northern Ohio Golf Association (NOGA) Two-Man best ball with partner Brian Sparrow.

Bob also enjoyed a 35 year career in the retail automobile business, entering through his father’s dealerships: Fairchild Chevrolet, Fairchild Jeep, and Fairchild Acura. Bob is married to Cynthia Fairchild and has a daughter Cynthia. Bob and Cynthia received the Friends of Juvenile Diabetes Research Foundation award in 2007, for their contributions to the organization. Bob has also been a supporter of and advocate for the Return to Golf Program based on the campus of the Wharton Golf Center at North Olmsted Golf Club. The mission of this worthy organization is to share the game with physically disabled children and adults through the creative combination of rehabilitation based golf fitness and recreational therapy. Bob has served on the board of the Ohio Golf Association and was inducted into the NOGA Hall of Fame in 2004.