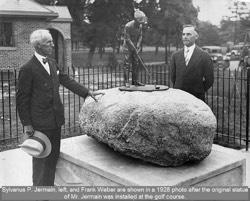 Born in 1859 in Adrian, Michigan, S.P. Jermain moved with his family to Toledo, Ohio in 1871. From that time on, he evolved into a visionary civic leader and a true pioneer of American golf.

S.P. was very involved in choosing the site and establishing the initial membership at the Inverness Club, which opened in 1903. He was the club’s first president. He was instrumental in bringing the U.S. Open to the club in 1920 and then again in 1931.

In 1907 S.P. authored The American Code of Golf, one of the first versions of the rules in the United States. In addition to Ottawa Park and Inverness S.P. helped to develop Bay View (1920), Spuyten Dyval (1930) and Collins (1932). He consulted on other courses, Highland Meadows, Chippewa and Glengarry country clubs.

Perhaps his most lasting contribution to the game came in 1920 when he proposed the idea of international competition that would pit a U.S. team against their counterparts from the United Kingdom. The first matches were contested in 1921 and in 1927 when British seed merchant Samuel Ryder donated money for what would become one of the most famous trophies in sports, they officially became known as the Ryder Cup.

S.P. Jermain died on April 20, 1935. Days after his passing, it was written in the Toledo Blade that S.P. was “the leading spirit in every golf tournament and every golf meeting of consequence for as long that no one could recall golf without visioning the presence of this man”