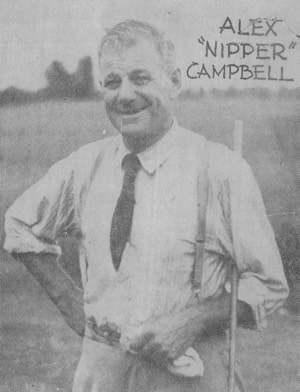 Born in Troon, Scotland in 1879, Alec “Nipper” Campbell came to the U.S. at the age of 19 to become the head professional at Brookline, Massachusetts’ storied The Country Club. In 1919 he became the head professional at Losantiville Country Club in Cincinnati, and from there moved on to the same position at Dayton’s Miami Valley Golf Club in 1925.

In 1927, Campbell directed construction of Meadowbrook Country Club and Fairmont’s Madden course. Perhaps his most significant contribution to golf course architecture came in 1929, when he designed Moraine Country Club in Dayton. Campbell was also a very accomplished player having missed qualifying for the U.S. Open only four times in the thirty-four year period from 1900-1934.

Alec “Nipper” Campbell was a true pioneer in American golf, and his posthumous induction into the Ohio Golf Hall of Fame is both well-deserved and long overdue.