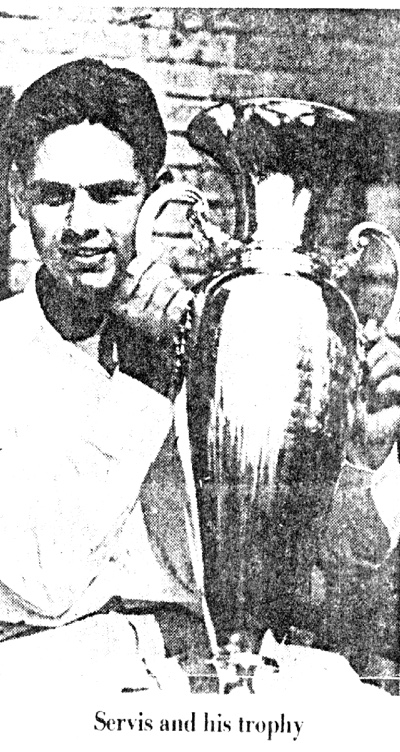 Born in the Dayton, Ohio suburb of Oakwood in 1915, Bob Servis became one of the greatest golfers in Ohio history. Mr. Servis is the only person in history to have won the Ohio Amateur Championship five separate times.

The 1939 Championship at Miami Valley was particularly noteworthy. In addition to being the home course of Mr. Servis, the tournament format back then was match play and Mr. Servis dominated his opponent by winning 10 and 9. Up until then, this was the largest margin of victory in the tournament.

Srevis was also twice runner-up in the OAXC and was considered one of the best amateur golfers in the country for almost 20 years. He was a legend in Dayton golf circles, having first qualified at the age of 13 for the Dayton City Amateur Championship. After being the qualifying medalist at the age of 16 in 1931, he won the Dayton title at 18 in 1933. He was previously inducted into the Dayton Golf Hall of Fame.

Perhaps it was always known that great golf was to be his destiny. While Servis was in the 7th grade at Oakwood Junior High School, he was recruited to play in a crucial tournament representing the high school team against much older boys. Nevertheless he won all of his matches including one against Ed Hamant who was then Dayton City Champion. When his young age was discovered, Hamant and his school protested to officials who reluctantly disqualified Servis from the competition because he was too young.

Like many of the amateur golfers of his time, Servis was very fond of the great Bobby Jones. He both knew and played with him. Servis was renowned for his excellent short game as was Jones. Also like Jones, Servis retired from competitive golf in 1948 at the age of 33.

Mr. Servis died in 1987 and is survived by his wife Betty, son Robert Servis II, and daughter Becky.