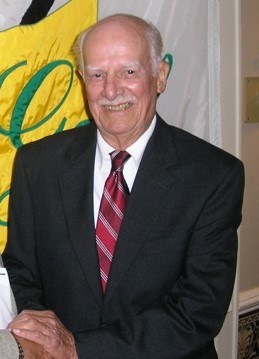 Duey was born in Columbus, Ohio in 1921, graduated from the University school, attended Muskingum College and The Ohio State University.

He was a naval aviator during World War II where he flew Anti-Submarine patrol in the Atlantic fleet and was carrier-based fighter pilot in the Pacific theater.

Duey started in the insurance business in 1946 and became a respected leader, teacher, lecturer, instructor and officer for a number of companies during his fifty-three years of involvement. He also served as president of the Athletic Club of Columbus.

He became a member of The Ohio State Golf Club in 1957, was appointed the OSU Governor to the CDGA in 1964, and became president of the CGDA in 1974.

Duey has donated his time and efforts to the game since 1966, serving as ranger, course rater, and full time starter in 1988.

He was elected secretary of the CDGA in the 1980’s and was appointed Governor and Secretary of the OGA in 1999 where he remained for many years. He became the OGA full time starter in 1994.

Truly, Duey was a man who made his mark by doing so much for others.