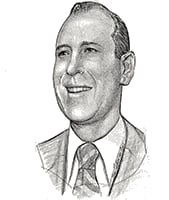 Edward Meister Jr. was one of those rare individuals who succeeded in putting back into the game of golf as much as he took out of it.

He qualified and competed in twenty-five United States Golf Amateur Championships, attesting to the quality of his playing ability over many years. Ed won four Cleveland District Championships from 1935 to 1947. He was a highly recognized international golfer, and was chosen to be on the US Walker Cup Team. Ed was captain of the Yale golf team in 1939 and 1940.

He qualified for at least fifteen US Open Championships and was invited three times to pay in the Masters.

He also worked strongly for the traditions of the game He was for a great caddy program and against slow play. He was chairman of the Greens Committee at Kirtland for eighteen years. As he evolved into an expert on turf management, he was elected to the executive committee of the USGA, where he served as chairman of the Green Committee.

Ed believed in making your course available for golf competitions, and brought the amateur and open qualifiers to Kirtland. He liked to se up the course at its most difficult, and today there is a tournament in his honor called the Meister Blue Tee Tournament.

There is a special tribute to Ed Meister Jr. in the men’s locker room at Kirtland, recognizing his tireless efforts in making that club adhere to the highest standards of excellence.

In 1979, Ed died after a two-year siege with lung cancer.