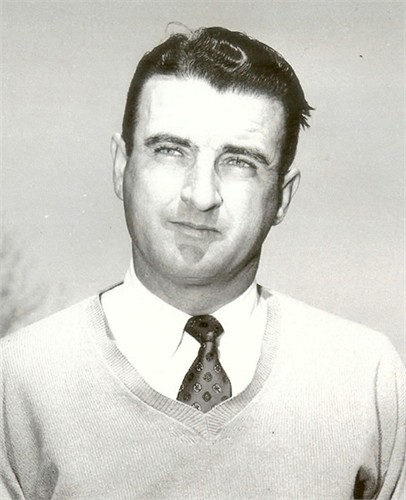 Jack F. Grout was born March 24, 1910 in Oklahoma City, Oklahoma. He was one of three professional golfing brothers. Grout turned professional at age 15.

During the years of 1927 and 1928, Jack Grout was Assistant Pro to his brother Dick at Glen Garden Country Club in Fort Worth, Texas, where he befriended two young caddie boys, Byron Nelson and Ben Hogan. After that, he played on the PGA circuit from 1932 to 1945.

Jack married in 1942 to Bonnie Fox of St. Louis, MO and had four children. During this time, Grout was assistant to renowned professional Henry Picard at Harrisburg Country Club in Harrisburg, Pennsylvania.

In 1950 he started as Head Professional at Scioto Country Club in Columbus, Ohio. It was there that ten year old Jack Nicklaus became his pupil and together they forged a teaching experience which lasted the rest of his life. Nicklaus conisdered him to be part of his family and thought of him as his second father. After Scioto, Mr. Grout furthered his career at La Gorce Country Club in Miami Beach, Florida. Winters were busy teaching notables like Bob Hope, Ray Floyd, Gibby Gilbert, Joe DiMaggio, Tommy Aaron, JC Sneed, Chuck Conners, Vic Damone and Joe Namath.

He will live forever through what he taught so many golfers. Truly, he was a famous teaching professional who made an enormous contribution to golf.