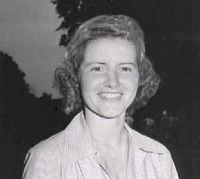 Janet and her brother Don, recently retired head professional at Columbus C.C. grew up surrounded by golf at Community Country Club at Dayton, Ohio, where their father was manager for 38 years.

At the age of eleven, she played in her first Cub Championship, was Central Ohio Junior Champion in 1932 and 1933, and lettered on the Fairmont High school boy’s team in Dayton. Mrs. Beardsley won her first Ohio State Women’s Amateur Tournament at Portage C.C. in Akron, Ohio in 1938, winning again in1940 and 1942 and came in runner-up in 1936 and 1960.

Mrs. Beardsley graduated in 1940 from Denison University in Granville, Ohio where she played third and fourth “man” on the men’s golf team. During her playing years at Denison, she won the Ohio conference championship. While there, she was inducted into the Denison ”D” Men’s Athletic Association, and in 1980 was inducted into the College’s Athletic Hall of Fame. After Denison, she married “Chuck” Beardsley, recently deceased. He was also a 1940 Denison graduate and varsity basketball player. They have two children, Phyllis Kwedar and Craig, who are also, golfers.

Janet Beardsley was five time City Champion, and participates in senior events locally and nationally. She is past President of the Ohio Senior Women’s Association, and was Senior Women’s Champion in 1976, 1977, 1980, and 1981.