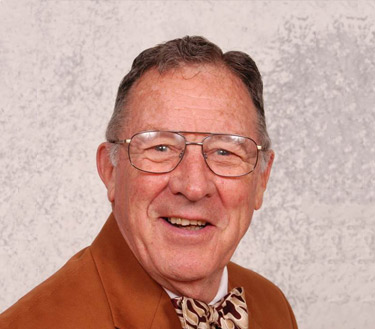 Dedication to the game of golf and commitment to whatever he is involved in aptly describes the life of John Kretzschmar.

John was born in 1933 in St. Joseph, Missouri. He now resides in Bowling Green, Ohio with his wife Sue.

His business career in the field of plastics brought him the presidency of many academy societies and associations in that field.

Not only was John well recognized in the business world, but he also gave unselfishly of his time and energies in civic and religious organizations.

John’s commitment to golf fell into many levels. He was president of the Toledo District Golf Association, and in 1991 was awarded the Burt Silverman Award, which is given to individuals who have enriched their communities through dedication to golf. He was chairman of the rules committee for the Mid Am Conference Championship. He was on the Search Committee for the golf coach for Bowling Green State University. He worked diligently as the chairman of the Marshals Committee the Jamie Farr Classic LPGA and the PGA at Inverness.

He is a member of the Great Lakes Senior Golf Association and the Evans Scholars Committee and in 2000 and 2001 held the coveted and well-deserved title of president of the Western Golf Association.

In the game of golf, John epitomizes the saying, “if you want something done, give it to a busy man.”