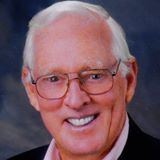 Kaye W. Kessler was born in Toledo, Ohio in 1923. At an early age he knew that he wanted to write about those things that he could not do.

He started working for the Columbus Citizen while still in high school. He graduated from OSU with a degree in journalism, but decided early on that the real world of journalism is not taught in ivory towers, but by studying English and literature.

He was a sportswriter/columnist from 1946 until the demise of both the Citizen and the Citizen Journal. He was a very prolific writer who covered every imaginable sport, and a few that were not.

He was president of the Golf Writers of America, and served on the boards of a wide variety of sporting organizations.

In 1984 he was named Ohio Sportswriter of the Year, and won the Jake Wade award from the College Sports Information Directors. He later became the media and player relations director of the International Tournament at Castle Pines.

One of his colleagues once wrote of Kaye W. (Warren) Kessler: “He has helped a lot more people and asked less, and the full story of the warm, gentle and kind man will never fully be told.”

Kaye has two children – Kris, who lives in Italy, and Rodney in Vermont.