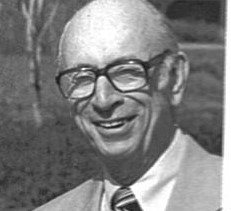 Paul Hornung began his journalism career in 1937 when he was one of four unsuccessful seekers of the editor’s job at the Ohio State Lantern. Hornung’s consolation prize – Lantern Sports editor.

That began his long association with Ohio State football, from which he branched out to cover amateur and professional golf in Central Ohio as a sports writer and later sports editor of The Columbus Dispatch.

Hornung became the Dispatch’s OSU sports correspondent in 1938 and began writing a popular column, “Backstage with the Buckeyes.” That appeared in the newspaper for 20 years.

Hornung joined the Dispatch sports staff full-time in the fall of 1940, covering OSU football, basketball and other sports, including amateur and professional golf.

He was named sports editor in 1958 and continued in that capacity, writing his column, The Press Box, until his retirement in 1981.

Hornung covered more than 300 consecutive Ohio State football games and an estimated 350 overall in his 45 years as a journalist. He also covered Rose Bowls, Super Bowls, major PGA tournaments and numerous events of all sorts.

He published three books: The Story of Muirfield Village Golf Club and The Memorial Tournament, Best of the Buckeyes and, with Marv Homan, Ohio State: 100 Years of Football.

Hornung was a native of New Bavaria Ohio, and a graduate of both Holgae High School and Ohio State University.