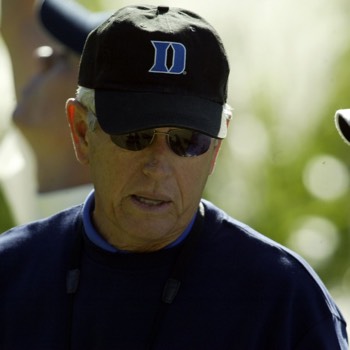 Rod Myers had an illustrious career as a coach and as a golf professional.

A native a Springfield, Ohio, Rod graduated from Ohio Wesleyan University in1961 after four years as a golf letterman and a year as team captain. In 1966 he became the head golf coach at The Ohio State University where he spent seven years guiding the Buckeyes before leaving for Duke in 1973.

Coach Myers led the Duke team to 30 tournament victories and seven NCAA Championship appearances. During his tenure he coached 16 all-Americans, nine academic all Americans, 24 all ACC selections, and three ACC individual champions. The 2005 season was his crowning achievement as a coach. It included four tournament victories, the ACC championship and an8th place finish in the NCAA Championship. The team featured three all Americans, and Coach Myers was named ACC coach of the year and Golfweek’s National coach of the year.

Rod was a highly regarded golf teacher and worked tirelessly to achieve the status of PGA Master Professional. Rod was a member of the PGA and USGA Rules Committees, and served as a rules official at nine consecutive Masters Tournaments, from 1995-2003. He was former chairman of the NCAA Golf Committee and served as treasurer and President of the Golf Coaches Association of America (GCAA). In May of 1986, Rod was inducted into the GCAA Hall of Fame.

Rod passed away in March, 2007. He is remembered as summed up by this quote from Michael Castleforte (a two time all-American under Coach Myers) , “ Only very special people continue to inspire people to be better even when their time is up and he was definitely one of those people.”