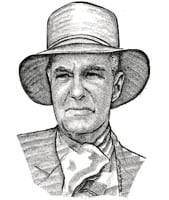 Thomas Sterling Beckwith, Jr. was born on February 5, 1865, the son of Cleveland’s premier dry goods, interiors, and carpets merchant. His athletic skill was not limited to the golf course, as he was also an accomplished tennis player prior to becoming a key figure in the introduction of golf to his hometown. Cleveland industrialist and philanthropist Samuel Mather brought the game to the city in 1895 after playing a round at the St. Andrews course in Mount Hope, New York while on a business trip. Upon his return home he organized the Cleveland Golf Club, which opened a nine-hole course in Glenville on July 13, 1895, with an exhibition match featuring Mr. Beckwith and J.D. MacLennin. Following this demonstration of the game, golf rapidly took hold in the area’s social and business circles.

T. Sterling Beckwith passed away on February 17, 1943, at the age of seventy-eight. He was inducted posthumously into the Cleveland Sports Hall of Fame in 1978. Mr. Beckwith played an important role as a competitive pioneer and longtime ambassador of the game of golf in our state, making his induction into the Ohio Golf Hall of Fame both long overdue and very well-deserved.