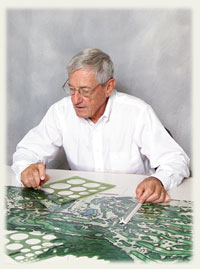 Arthur Hills has been designing golf courses for over twenty-five years, with many gaining national recognition. In January, Golf digest honored Arthur Hills by naming the golf club of Georgia and Harbor Pointe Golf Club as “Best New Private Course” and “Best New Public Course” of 1991. It was the first time in the ten-year history of the Golf Digest Awards that a single architect won in both categories in the same year.

There are many other Arthur Hill’s courses awaiting their rightful recognition. The championship in Lexington, Kentucky is currently ranked #1 in the state. Bighorn Golf club in Palm Desert, California is the new home of the nationally televised skins Game. Bonita Bay’s Marsh Course in Bonita spring, Florida has been ranked in Golf Digest elite “Top 100 Courses in the U.S.” since 1988.

To date, Hills has designed over 150 courses, plus another 100 or so, which he has renovated. Many of the classic courses that have hosted major championships retain Arthur Hills as their golf course architect because of his reputation as a traditionalist. Prestigious clubs such as Oakland Hills, Inverness, Oakmont and Crystal Downs have all hired Arthur Hills for various renovation projects.

There are no gimmicks to his personal make-up, or his designs. His concept is to create a course, which will be just as enticing to a player ten years from now as it is today, whether the person is a 36 handicapper or a professional.

What makes a great golf course architect? “Education, a good knowledge and appreciation of the game, a sense o golf’s history and plenty of energy, “says Hills, and he adds, “an accommodating family, no aversion to travel, an ability to get along with people and some artistic aptitude.”

Hills graduated from Michigan State University in 1935 with a degree in Horticulture. He was a member of the MSU varsity golf team. After service with U.S. armed services, he obtained Landscape Architecture degree from the University of Michigan. One of Hills greatest honors came when both universities hired him to renovate their respective courses.