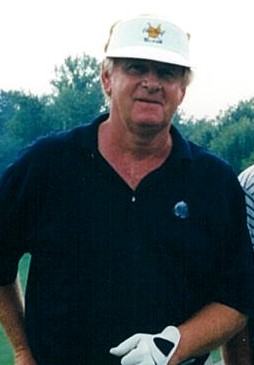 Denny’s tournament began with winning the OGA Junior Championship in the 15 and under division. He was a member of The Ohio State University golf team which won the Big Ten title in 1966.

Denny also achieved the dream of every golfer when he qualified for the US Open at Winged Foot in 1984.

He has qualified for numerous USGA Championships and also the British Amateur at Royal Birkdale in 1989.

Denny is the 2000 Ohio Senior Hall of Fame Champion along with the Charlie Coe Invitational at Castle Pines the same year.

For Gallagher, Hall of Fame ceremonies are quite common, as he has already been enshrined in the Cincinnati Legends Hall, the Hall of Fame at Mt. Gilead, and into the Maketewah Legends of Golf.

His club championships include those at Mount Gilead Golf Club, Maketewah CC and Coldstream CC in Cincinnati, along with Fiddlesticks CC in Ft, Myers Florida and the Tradition Golf Club in Palm Springs California.

He has been a member of the Ohio Golf Association Board of Governors since 1995, until he stepped down in 2016.