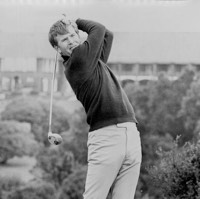 Ed Sneed was born in 1944 in Roanoke, Virginia. He is a professional golfer, former golf T.V. broadcaster and course design consultant who played on the PGA and Champions Tour.

He attended The Ohio State University and was a member of the golf team. He turned pro in 1967. He worked briefly at Scioto Country Club.

Ed won four PGA Tour events during his career. His first win came in the 1973 Kaiser International Open. A year later he was wire-to wire winner at the Greater Milwaukee Open: in fact the only golfer in the history of the tournament to win wire-to-wire until Ben Crane (2005) and Corey Pavin (2006). Ed was a member of the Ryder Cup team in 1977. He had more than forty-five top 10 wins in the PGA Tour events.

Sneed is best known for his loss at the Masters in 1979. Beginning the final round with a five stroke lead and a three stroke lead with 3 holes to play, he made bogey on all three holes to get into a playoff with Tom Watson and Fuzzy Zoeller. He lost to Fuzzy on the second playoff hole in the first year the sudden death format was used.

Ed made his debut on the Senior Tour (now Champions Tour) in 1994. His best finish was T-5 at the Bell Atlantic Classic.

Ed also worked eight years as a golf broadcaster for ABC television and with CNBC in 2001. Ed has been involved with course design. The Lakes Golf & CC (Westerville, OH.) being one of his project, designs.