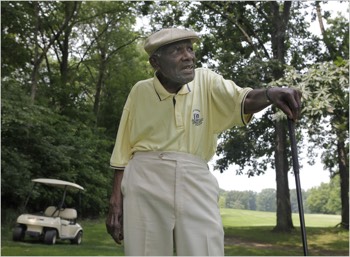 The year was 1946, and despite having been captain of both his high school and college golf teams and having served with distinction in World War II, due to his race, William Powell was not welcome at most public golf courses in east central Ohio. So he decided to take matters into his own strong hands, and used them to carve Clearview Golf Club out of the rolling, woodsy farmland of East Canton, Ohio.

Dr. P., as he was known to his friends, grew up in Minerva, Ohio and was introduced to the game of golf at the age of nine when he started caddying at the Edgewater Golf Club. By the time he was 12, he spent all his spare time on the practice fairway, driving balls and analyzing their flight. He captained the Minerva High School golf team, and in 1937, he and his older brother Berry formed Wilberforce University’s first golf team, serving as co-captains.

Bill was widely regarded as the best player in the area, but upon return from the service he discovered he was not welcome at just one area golf course. So in 1946, with the help of two black doctors as partners, and his brother, who mortgaged his house, Bill purchased a dilapidated 78 acre dairy farm. Working from sun-up until it was time for his eight hour shift as a watchman at a local factory, it took William two years to complete the first nine. A second nine would be added 30 years later, in 1978. Today, Clearview Golf Club remains the only golf course in the U.S. to be designed, built, owned and operated by an African-American, and is listed on the National Register of Historic Places.

Over the years, Bill has received countless honors and awards recognizing a lifetime of remarkable achievements. In 1992, the National Golf Foundation selected the Powell family to receive “The Jack Nicklaus Golf Family of the Year Award”. That same year, Bill was awarded the “Cornerstone of Freedom Award” from the Dr. Martin Luther King Jr. Commission.

In 1998, the Tiger Woods Foundation established two scholarships in the names of William and Marcella Powell, Bill’s wife of 56 years. Marcella shared his passion and vision for Clearview serving as Clearview’s office manager until her death in 1996. Bill and Marcella’s three children, William, Renee (the second African-American to play the LPGA Tour) and served as Clearview’s club pro, and Lawrence (who served as course superintendent), and all contributed to the course and securing their father’s legacy as a true pioneer in the golf community.