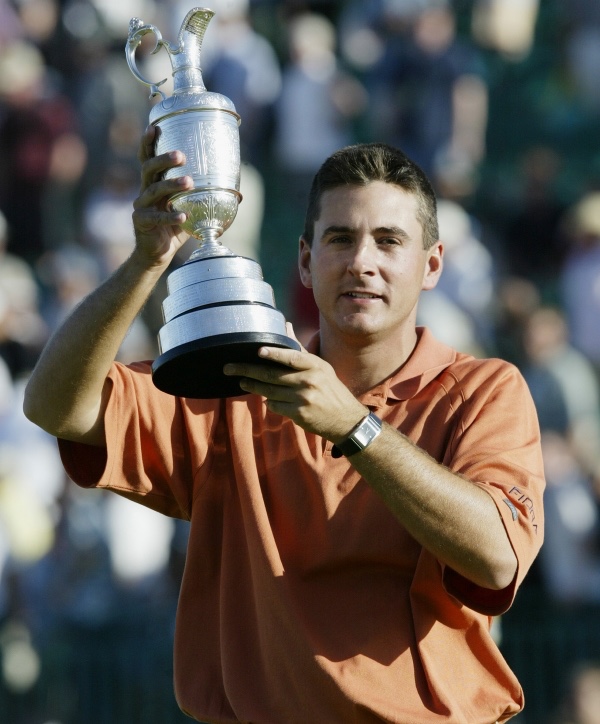 Ben Curtis was born in Columbus, Ohio on May 26, 1977. When he first picked up a golf club three years later no one would have imagined where the game would take him, including a magical trip to the summit of the golf world just over two decades into the future. Young Ben received his introduction to the game at Mill Creek Golf Club in his hometown of Ostrander, Ohio a village of roughly four hundred located 35 mile West of Columbus. Ben’s grandfather, Bill Black, built Mill Creek and his family still operates the facility- His mother, Janice, works in the pro shop and his father, Bob, is the course superintendent. In Ben’s own words, he was “enamored” by the game from the very beginning and “always dreamed of one day playing golf on the PGA Tour.”

Ben spent his childhood years diligently honing his golf skills at Mill Creek and developed into t two-time Ohio High School State Champion while attending Buckeye Valley High School. He then received golf scholarship to compete at Kent State University for head coach and fellow Ohio Golf Hall of Fame member Herb Page. Ben was a three-year team captain at Kent and led the Golden Flashes to four consecutive MAC Championships, three NCAA Regional bids, and two NCAA Championship appearances while earning All-American honors three times. Also during his college years, Ben reached the semifinals of the 1999 U.S. Amateur Championship at storied Pebble Beach Golf Links and was a member of the victorious 1999 United States Palmer Cup team. He won the 1999 Ohio Amateur Championship at Moraine Country Club in Dayton, and was utterly dominant in his successful defense of that title with a wire-to-wire seventeen shot victory at Columbus’ Brookside Golf & Country Club in 2000. Also in 2000, Ben helped the Unites States claim the Eisenhower Trophy as a participant in the World Amateur Team Championship held in Germany.

When he made the decision to turn professional in 2000, Ben was the top ranked amateur in the world. He began his pro career competing on the Hooters Tour before earning his PGA Tour card via the 2002 qualifying school. Ben’s first finish inside the top twenty-five in a tour event came at the 2003 Western Open, where he finished in a tie for thirteenth which qualified him for the upcoming Open Championship at Royal St. George’s Golf Club in Sandwich, England. He then proceeded to shock the golf world by holding off the likes of Tiger Woods, Davis Love III, Vijay Singh and Thomas Bjorn to hoist the Claret Jug and be crowned ‘Champion Golfer of the Year.” Ben was the first player to win a major championship in his first attempt since Francis Quimet had recorded his historic triumph in the 1913 U.S. Open. Upon his return home, Ben made appearances on “The Today Show” and the “Late Show with David Letterman”, and he was invited to the White House where he met President George W. Bush. Ina fitting conclusion to his dream Ben was named the 2003 PGA Tour Rookie of the Year.

During the 2006 season, Ben validated his Open Championship victory with tour wins at the Booz Allen Classic and the 84 Lumber Classic. In 2008, he reached a new level of consistency on tour, notching five top-ten finishes while missing just four cuts. Highlights of the season included a tie for seventh in the Open Championship at Royal Birkdale Golf Club and a tie for second in the PGA Championship contested at the notoriously demanding Oakland Hills Country Club. Ben’s steady play earned him a spot on Captain Paul Azinger’s 2008 United Sates Ryder Cup squad at Valhalla Golf Club in Louisville, Kentucky. He contributed to the U.S. team’s winning effort with his 1-1-1 record, which included a 2 and 1 singles victory over Lee Westwood on the final day. Ben was honored to represent his country in international competition for the second time in the same year when he and Brandt Snedeker were chosen to compete in the 2008 World Cup of Golf at China’s Mission Hills Golf Club.

Ben would add a fourth PGA title to his competitive resume at the 2012 Valero Texas Open. In early 2018, weary from the grind of the not-always-so-glamorous tour lifestyle and wishing to spend more time at home with his wife, Candace, and their two children, Ben decided to step away from competitive golf after accumulating more than $13.8 million in official tour earnings. He currently resides just North of Kent, Ohio and has recently established the Ben Curtis Golf Academy located at the Country Club of Hudson in Hudson, Ohio. Ben wants to give back to the game that has given him so much to him by sharing his overall knowledge of the sport with aspiring young players and their parents who will guide and support them as they work toward achieving their goals in competitive golf. Ban and Candace also established the Ben Curtis Family Foundation in 2013 with the stated goal of helping to alleviate childhood hunger. The foundation has developed the “Birdie Bag” program to distribute bags containing meals, snacks, and toiletry kits to students in need. Over 40,000 “Birdie Bags” have been sent home with local children so far, and the program will soon be expanding to neighboring communities.

In the days following his former star player’s stunning Open Championship win, coach Herb Page said of Ben, “He’s very down to earth. He’s a wonderful young man. He’s a better person than a golfer.” The world learned just how good of a golfer he was during that storybook week when he secured his professional legacy amidst the undulating terrain and expansive sand dunes of Southeast England. With his dedication to family and his dual commitments to giving back to the game and serving his community, Ben Curtis is simply demonstrating that Coach Page knew what he was talking about all those years ago.