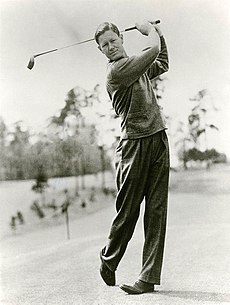 Byron Nelson, 82, who retired at 34, once was reverently labeled “Good Lord of Golf”, by a national magazine writer. But it hardly encompasses the story of one of the world’s greatest golf legends.

Byron Nelson established records that have never been—nor ever will be—threatened. It all began on a borrowed $600 back in 1933. In four years he made enough to progress to win the Masters at age 25 and to launch a career that stamped him as one of the all-time greats in golf.

The golf world recognizes Byron’s greatest feat as the string of 11 straight victories on the tour! In that unforgettable 1945 season, this run of wins highlighted a year when he won 18 times. He was victorious, in succession, at the Miami Tour-Ball at match play; at Charlotte, Greensboro, Durham, Atlanta and Montreal Opens; Philadelphia Enquirer Invitational; Chicago Open; PGA Championship at Moraine Country Club in Dayton at match play; All-American and Canadian Opens.

Nelson’s stellar performances circled his career in Ohio in the 1940’s when he served as club professional at the prestigious Inverness Club in Toledo.

Now Byron Nelson has an annual tour tournament named after him. He spends his “retirement” from golf as a prosperous Texas rancher, an active business man who has been appointed to numerous boards that value his experience as a man of many talents away from the links he loved so much during 14 years when he ranked No. 1 in his profession.