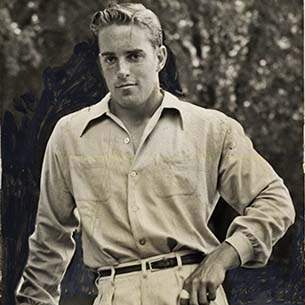 Frank Richard Stranahan was born August 5th, 1922 in Toledo, Ohio, the son of R.A. Stranahan, founder of the highly successful Champion Spark Plug Company. Frank learned the game of golf at the storied Inverness Club, where he received instruction from the legend Byron Nelson who served as the club’s professional from 1940-1944. This laid the foundation for what many golf historians consider one of the finest careers in the history of the game.

Frank won the 1940 Toledo District Junior Championship and the Inverness Club Championship before claiming the 1941 and 1942 Ohio Amateur Championships. His golf career was interrupted for nearly two years while he served his country as an Army Air Corps pilot during World War II, but “Stranny”, as he was known to his fellow competitors, was able to to resume his winning ways quickly. From 1945 until he turned professional following his loss to Arnold Palmer in the fifth round of the 1954 U.S. Amateur Championship. Frank won a remarkable 51 amateur titles. Among his most significant victories were:

During this period, Frank also finished in the runner-up position in the 1947 Masters (tied with Byron Nelson behind Jimmy Demaret) and in the 1952 and 1953 (behind Ben Hogan) British Opens. According to PGA Tour records, Frank won six tournaments, was runner-up seven times, and posted 67 top 10’s in a combined amateur and pro career that lasted through the 1964 season, when he retired from competition. His most notable win as a professional came in the 1958 Los Angeles Open.

Frank was also ahead of his time with respect to fitness. He was known as “The Toledo Strongman” and traveled to tournaments with his own weightlifting equipment decades before intense training regimens became the norm for PGA Tour players. Following his retirement from competitive golf, in addition to earning a Master’s degree in business from the University of Pennsylvania’s Wharton School of Finance, Frank also became a prolific long distance runner, competing in 102 marathons. He continued to win bodybuilding and weightlifting championships well into his 70’s.

The Toledo Junior Golf Association has presented the Frank Stranahan “Player of the Year Award” every year since 1973. According to the Associations website, “Just as Frank Stranahan did, the recipient of this award must not only have fine playing abilities, but more important, they must display those qualities of fair play, honesty, and respect for fellow competitors, sportsmanship, and dedication.

Frank Stranahan passed away on June 23, 2013 at the age of 90. Frank’s golf career may have been best summed up in the Toledo Blade, where it was written shortly after his passing that he “was born into a Toledo industrialist family and went on to combine privilege with talent and hard work to become the greatest amateur golfer in the world of his era.”