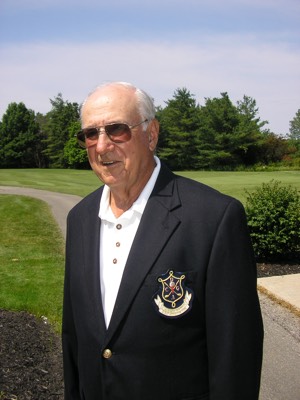 Dr. Fred Balthaser has been a Columbus resident since his birth there in 1925. He graduated from St. Charles High School and went into the Navy the next day, where he served three years in the South Pacific.

He enrolled in The Ohio State University in 1946 and graduated from the College of Dentistry in 1951. He practiced forty years in Grandview and Westgate areas of Columbus. He and his late wife Betty Lou had for four children who all live in the Columbus area.

He began his love of golf as a caddy at Scioto Country Club and soon started playing the game at Beacon Light Golf Club which was owned by Jack Kidwell.

Throughout the years he became great friends with Mr. Kidwell. Fred always said he is very grateful to Jack for the kindness, generosity, guidance and influence he had in his life of golf.

In the late 1950’s he was part of a group that built the Oakhurst Country Club where he won several club championships. He was ardent supporter of the Columbus District Golf Association and the Ohio Golf Association events.

In 1977 he was included in the group who built Hickory Hills Golf Club. Everyone’s friend, Jack Kidwell, helped the group sell stock and built the course which became very popular with a full membership of 350. He represented Hickory Hills in the CDGA Board of Governors in 1978, and served as a member of the board ever since. He was president in 1988.

He gave so freely of his time on behalf of golf. He was a USGA committee man for two years, course rating co-chairman seventeen years, and rules official for the CDGA and the OGA for fifteen years.