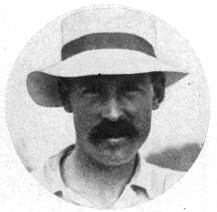 Born in Dorkin in Surrey, England in 1882, George Sargent began his golf career at the age of twelve at Epsom Downs Golf Club. At the age of seventeen, he signed on with the legendary Harry Vardon, who then recommended him as a student to Sir Edgar Vincent. Sir Vincent coached Sargent and helped him to finish fourth in the 1900 Open Championship. Sargent then moved to Canada where he served as professional at Royal Ottawa Golf Club and finished second in the 1908 Canadian Open before going on to win the championship in 1912.

The highlight of Sargent’s competitive career came in 1909, when he won the US Open at Englewood Golf Club in New Jersey. In doing so he set a new 72 hole scoring record of 290. He played in a total of sixteen US Opens, finishing in the top ten six times. Sargent also won the 1918 Minnesota state open to add to his numerous victories.

George became a member of the Professional Golfers Association of America at its inception in 1916, and served as its president for five years. He made his most notable contribution to golf instruction in 1930, when he introduced the use of motion pictures to study the golf swing. Sargent was the Head Professional at Scioto Country Club in Columbus, Ohio from 1912 to 1924, at Interlachen Country Club in Minneapolis, Minnesota from 1924 to 1928, and Chevy Chase Country Club in Chevy Chase Maryland from 1928 to 1932. In 1932 Bobby Jones brought r. Sargent to East Lake Country Club in Atlanta, Georgia, where he served as Head Professional for fifteen years. Harold two son’s Harold and Jack were also accomplished golfers and all three are in the Georgia Golf Hall of Fame.