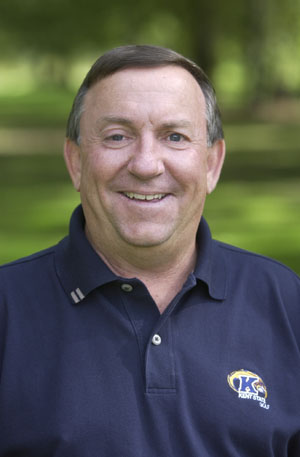 He celebrated his 26th year as head golf coach at Kent State in 2003. He led members of the KSU golf team to the NCAA in eighteen of the past twenty years. The 2003 British Open champion, Ben Curtis, is one of his protégés, as well as Jon Mills, Kent State’s first first team All-American.

In twenty-five years of coaching, Page has led the Golden Flashes to sixty tournament titles. He has been named NCAA District IV Coach of the Year seven times, and the MAC Coach of the Year thirteen times. He has coached fifty-seven All-MAC golfers, nineteen All-Americans and thirteen golfers who have been selected as All-American Scholar Athletes.

As an undergraduate at Kent State University, he earned eight Varsity letters; four in golf and two each in football and ice hockey. Page still holds Golden Flashes’ season extra point kicking record in football. In 1974 he was named the MAC Scholar Athlete of Year.

He is married to Dr. Paula Trechel, a history professor at Allegheny College in Meadville, PA, and they reside in Kent.