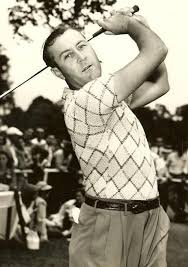 Herman Keiser was born in Missouri on October 7, 1914.

He became an assistant professional under Al Espinosa at Portage Country Club in Akron from 1939 – 1940. He then became head professional at Firestone CC in Akron.

In 1946 Herman won the Masters, the Knoxville Invitational, the Richmond Invitational, and was runner up at both the Phoenix Open and the Greensboro Open.

He won numerous Ohio Open championships and was on the 1947 Ryder Cup Team.

Herman has ten holes in one.

He tallied seven wins on the PGA tour, and once shot a 60 at Portage Country Club to win the Akron District Open.

Herman is no stranger to Plum Brook. In 1946 he played in an exhibition match, where he was teamed with Ben Hogan, against Byron Nelson and home pro Bill Gordon.