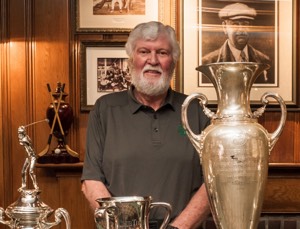 John P. Sayers II, known as Jack, began his career in golf at the age of fourteen in Springfield, Ohio. He won the Springfield Jaycee Junior City Amateur at the age of sixteen and represented Springfield High School in the Ohio state high school championship his junior year. He returned to the state tournament his senior year, this time as a member of the Springfield North High school team. After graduating from high school, Jack attended Kent State University where he played golf all four years for the Golden Flashes and was named team captain as a senior.

In 1966, Jack won the first of three consecutive Springfield City Amateur titles, tying a record that has stood for thirty years. He finished second in his attempt to break the record in 1969 and would have to wait twenty-five years for his fourth victory in the event, which only served as a testament to his longevity as a competitive golfer. In his fifties, along with partner Jeff Steinberg, he claimed two consecutive titles in the Senior Pro-Am contested at Crooked Stick Golf Club in Indianapolis. He tied for first in the Ohio Senior Amateur event played in Marietta, but came up just short of outright victory after losing in a playoff. Jack did succeed in winning the Miami Valley Golf Association Senior Amateur title, which included a nine-hole score of five under twenty-nine. Along with his long time playing partner, Dr. Chuck Parsons, Jack also won several am-am events throughout the Miami Valley. As a long standing member of Springfield Country Club, Jack is a nine time club champion. He has served on the club’s board of director’s, is a past president, and has been named the permanent chairman of the club’s committee overseeing the long-range master plan to ensure the continued improvement and preservation of the historic Donald Ross design.

Most importantly to Jack, he has served the Ohio Golf Association (OGA) in numerous capacities for over thirty years, including 10 years as the organizations president. During his tenure, the OGA successfully instituted a soft-spikes only policy for its competitions. This necessitated the changing of too many cleats to count before plastic became the norm, and competitors were mercifully spared from the scourge of thousands of nerve-devouring blemishes that couldn’t be tapped down and always managed to derail even the most perfectly rolled putts! The OGA has also developed an innovative pace of play policy, realizing that slow play is a major detriment to golfer’s enjoyment and the long-term health of the game.

Jack has been fortunate enough to record the rarest of birds in the game-an albatross, along with four holes-in-one. But he says even the excitement of those feats pales in comparison to the joy the game has provided him in the form of many friends, fellow competitors, famous players, and dedicated staff members with whom he has been extremely privileged to share his passion for the game with. Jack believes that golf is truly a game of life and a game for life.