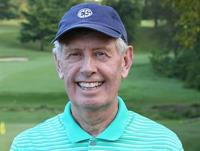 James C. "Skip" Snow has built a strong reputation in the Miami Valley for his work as an accountant and as a strong family man and sportsman who also excelled at golf.

Skip Snow, who at the age of 72 won his 21st Dayton Country Club Championship.

A native of Springfield, Snow is a graduate of Miami University who played on the MU basketball team from 1962-65. He won the City Men’s Amateur Match Play Golf Championship in 1978.

Skip has been a perennial favorite in Society of Seniors events where he has won three events, the 2002 Ralph Bogart, the 2011 Ralph Bogart and the 2017 Fall Classic.

Snow is a past recipient of the US Senior Challenge "Man of the Year" award. The honor is presented to "a person whose life has been exemplary in family, business and golf."

Since retiring from his position with an accounting firm 14 years ago, Snow has accepted invitations to play in many prestigious senior golf events across the United States. He also teed it up twice in the British Amateur.

He was inducted into the Dayton Golf Hall of Fame in 2001. Each year the Miami Valley Team Invitational receives the "Skip Snow Cup"