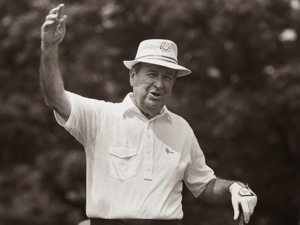 Gov. James A. Rhodes thrived on sports – especially golf – in his multi-years as one of Ohio’s most colorful and ambitious public officials.

A low-handicap golfer, Rhodes managed to sprinkle sports activities abundantly in his personal agenda and thereby enhanced his popularity with his public.

Golf was his first love. He was an inveterate supporter of events that helped junior golf and caddies.

His national golf tournaments to benefit caddies drew some unbelievable talent to Columbus long before golf, sports and entertainment “names” appeared at charity outings. His stable of celebrities included the likes of Perry Como, Dizzy Dean and the colorful Jimmy Demaret and dozens more who did not hesitate to answer his call for personal appearances while he was mayor of Columbus.

He formed the Knot Hole Gang, the Columbus Boys Club, the All-American Newspaper-boys Sports Scholarship program. He received the Silver Keystone Award of the Boys Clubs of America and the Helms Foundation Award for his outstanding work in combating juvenile delinquency.

Rhodes was a two-term president of the American Athletic Union (AAU). In 1948, he represented the US at the Olympic Games in London. Rhodes is a founder of the Pan-American games. He has been active with the US Olympic Committee, which demonstrates his versatility in sports events.

Rhodes served four, four-year terms as Ohio Governor: 1963 –1971, and 1975 – 1983. He was State Auditor for 10 years. Before that he was Mayor of Columbus for 10 years, starting when he was only 34. He was Columbus City Auditor for two terms. The ex-governor is a native of Coalton in Jackson County, where he was born 83 years ago. He attended high school in Springfield and then went to Ohio State University. Rhodes has co-authored three novels and two non-fiction books.