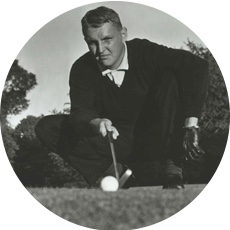 Mark H. McCormack has been termed by Sports Illustrated as “the most powerful man in sports”. The Wall Street Journal describes his firm as a “sports and business empire”. Mark began his career in sports in 1960 as Arnold Palmer’s manager. This contract was implemented by a handshake. Shortly thereafter, he founded International Management Group, the first company devoted exclusively to the management of professional athletes. He now has over 2,000 employees with offices throughout the world. Mark, in his youth when time was not so pressing, was not only an avid golfer, but also on whose skills qualified him to play in the British and US Amateur’s, and the US Open.

After two years under Mark’s management, Arnold Palmer became the most financially successful athlete of all time.

From this beginning, IMG has grown into the world’s largest independent source of televised sports, creators and operators of scores of international significant sporting events, and sports marketing consultant to major corporations. Today, McCormack’s roster of celebrated clients has been widely diversified.

With the publication and extraordinary success of “What They Don’t Teach You at Harvard Business School”, Mark McCormack has emerged as one of today’s foremost business philosophers.