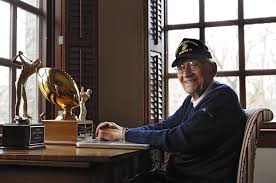 Pandel Savic was born in 1925 in Macedonia, formerly Yugoslavia. He came to the United States in 1935 and settled in Girard, Ohio. He graduated from Girard High School in 1943 and has been inducted into its Athletic Hall of Fame. Pandel served in World War II as a Marine with the 1st Marine Division in the South Pacific where he participated in two engagements – at Peleliu and Okinawa.

Pandel was introduced to golf by Bob Rankin, a 1996 inductee into the Ohio Golf Hall of Fame.

The same competitive fires that burned in his football career followed Pandel in golf. He won the club championship at the Ohio State University on its famed Scarlet course. He also won the club championship at Muirfield Village Golf Club and three times at the Scioto Country Club. He qualified twice for the U.S. Amateur and was a quarter finalist in the Ohio State Amateur.

In 1962 he won the U.S. Pro-Am in Cincinnati with Jack Nicklaus as his partner. He is also a member of the Society of Seniors. He has played in 27 of the Bing Crosby/AT&T Pebble Beach “clambake” with numerous professional partners.

Perhaps one of Pandel’s crowning attributes should be not what he has taken out of the game of golf, but what he has put back into it. He has been the General Chairman of the Memorial Tournament since it inception and has over 2,500 volunteers working under his supervision.