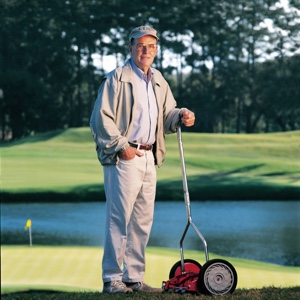 Paul “Pete” Dye is a legend in the field of golf course designing and construction throughout the expanding world of golf.

Dye’s reputation is international in scope. And he comes by his career naturally. His father designed and built a nine hole golf course on his mother’s farm near Urbana, Ohio. It was a good enough original effort that it has not been altered since it was finished in 1923 – two years before Pete was born.

Pete’s son, P.B. Dye, also a designer and builder of golf courses, is now adding a second nine to the hometown course.

Pete himself had a hand in the eventual development and maintenance of the Urbana layout while, as a teenager, he worked as the Greenkeeper.

World War II interrupted matters and Dye served in the Parachute Infantry of the US Army from 1943 to 1946. Upon his release, Pete attended Rollins College and Stetson University. He married Alice O’Neal, an outstanding golfer, who is captain of the women’s US World team and a member of the 1950 US Curtis Cup team. The two established a successful insurance business in Indianapolis.

Pete has maintained an ambitious and world wide business designing and building top-rated golf courses. The Golf Club in Columbus is a showplace. Dye has 10 courses listed in the top 100 of a national magazine. One of his most noted layouts is the :Teeth of the Dog” course at Casa de Campo in the Dominican Republic.

Pete designed and built PGA West, which hosted the Skins Game for five years. The PGA National Club Championships played four of its five past events on Dye courses.

Some golfers are not Dye-course fans. The PGA West creation is the only one to be boycotted by touring Pros. Nevertheless, when leading designers and builders are discussed in the golfing industry, the name “Pete Dye” is always in the forefront.