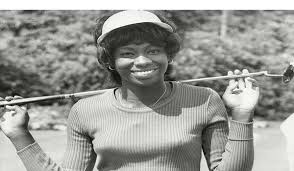 When William Powell purchased a small golf club to fit his three old daughter’s hands, he could not have imagined the things that were to come for his little girl. Renee Powell would grow up to become just the second African American woman to compete on the Ladies Professional Golf Association (LPGA) Tour, and aw her playing career wound down, Renee dedicated her life to giving back to the game that had given her so much.

Renee got her first taste of the game at the course her father built, Clearview Golf Club in East Canton, Ohio. Following a productive junior career, Renee attended Ohio University in Athens, Ohio and was named captain of the women’s golf team. Renee transferred to The Ohio State University following her sophomore year at OU, when her golf coach decided she would not compete in a tournament in Jacksonville, Florida due the potential for racial tension. Renee was also named captain of the women’s golf team at OSU, and recognized as the top female amateur golfer in Ohio.

During her amateur career she participated in over 100 tournaments. Her first United States Golf Association (USGA) national event was the USGA Girl’s Junior Championship where she made history as the first African American to compete in the event, and she advanced to the quarter finals.

Renee turned professional in 1967, and in her 13 years on the tour, she competed in more than 250 tournaments around the globe. She won the Kelly Springfield Open in Brisbane, Australia with a final round course record 67. She represented the United States in the US vs. Japan Team Matches on four different occasions.

During the 1970’s Renee was part of the USO Tour to Vietnam, giving golf clinics in hopes of raising the spirits of our troops abroad. In 1979 she made history once again by becoming the first woman to be named head professional in the United Kingdom at Silvermere, located near London.

In 1989, Renee was inducted into the Ohio Women’s Hall of Fame, and in 1991 she received the Dr. Martin Luther King Drum Major for Justice Award in the world of Sports.

In 1195, Renee joined the family at Clearview, taking over as head professional. She became the only African American Class A member of the PGA of America at the time. She became a well-known teacher of the game and served on the instruction panel with Golf Digest.

She established the Renee Powell Youth Golf Camp Cadre program, supported by the PGA of America. She received the Woodholme Foundation Legend of Golf Award and the Card Walker Award from the PGA Tour for her significant contributions to the game.

Finally in 2003 Renee became the first and only woman to be inducted into the Northern Ohio PGA Hall of Fame and the honor in 2003 as being the recipient of the 2003 First Lady of Golf Award by the PGA of America.