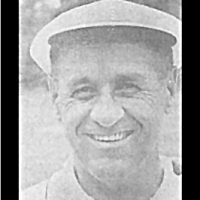 Steve for many decades has been referred to as “Mr. Golf” in Northeastern Ohio. He was the youngest of five children and was raised on a small farm adjacent to the Poland Country Club where he made a bargain with his mother whereby he traded his football ambitions for a set of golf clubs.

He attended Ohio State University studying the field of engineering and played on the Scarlet and Grey golf team.

With only a short time required before graduation, he left college to assist his father in the family’s newly acquired business. He was the major contributor to the business success, as it evolved into a major supplier of building supplies in Youngstown, Ohio. He retired in 1992 at the age of 75.

Steve and his late wife Matilda are the proud parents of four children; Linda, Bud, Bill and Dan who are all physicians, specializing in four different fields of medicine.

Even though his time was in such demand by his business and his devotion to his family, he still found time to play golf. And play he did. Many times was he selected as the man or player of the year in the Youngstown area.

Steve is a lifetime member of the Ohio Golf Association board of governors, founded the Youngstown District Golf Association, the Fonderlac Country Club and was an enthusiastic supporter of the Evans Scholars.