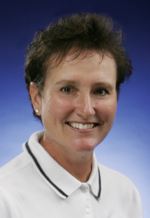 Tammie Green’s golf career got a big boost when she won three tournaments in 1982 as a senior on the Marshall University golf team. She also was low amateur in the 1981 LPGA Wheeling Classic. She credits Paul Thomas as the individual who has had the most influence on her career.

Tammie married Bill Parker in June 1998 and has one daughter, Tina Marie. In 1989, she was named the most improved player of the year by Golf Digest, and served on the LPGA Executive Committee from 1992 to 1994. In 1987 she was named LPGA Rookie of the Year.

She has seven official victories on the LPGA, including one major, the du Maurier Ltd. Classic, which she won in 1989. In 1993 she won two events, the Healthsouth Palm Beach Classic and the Rochester International, during which she recorded a career low 63 during the third round. She won the Youngstown Wareen LPGA Classic in 1994, the Sprint Titleholders Championship and the Giant Eagle LPGA Classic in 1997, and the LPGA Corning Classic in 1998. Tammie has two unofficial wins in the Diner Club Matches when she was paired with Kelly Robbins.

Throughout her career she had many top ten finishes and at least four holes in one during tournament play, her first in 1991 at the Crestar-Farm Fresh Classic.

In 2003, Tammie had her best year on tour since 1998. She posted three top 10’s and was tired for second in the John Q. Hammons Hotel Classic. She carded a season low of 66 in the Welch’s/Fry’s Championship.