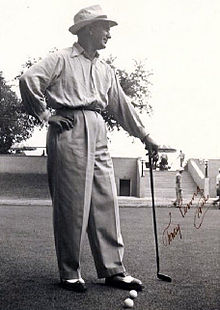 Toney Penna was born in Naples, Italy 84 years ago and after he come to the United States as a youngster he discovered that his future would be in golf, first as a caddy and later as a professional tourist, teacher and club designer and manufacturer.

Toney’s successes in the sport were not predominantly on the playing grounds because he developed golf-club designing skills that resulted in a line of Toney Penna woods and irons that ranked with the best.

For many years, he was one of MacGregor golf’s ace representatives before he formed his own club manufacturing companies in Florida. Only recently it was announced that the company will begin to manufacture and market a new line of Jack Nicklaus equipment. Jack dropped his affiliation with MacGregor and is now tied in with the Penna operations, from which Toney is inactive.

Penna was a prolific contestant on tour. He became a PGA member in 1929. He taught at numerous clubs and was an assistant to Tommy Armour and Alex Smith. He instructed extensively and one of his pupils was Bob Hope, and another was Nathaniel Crosby, who Penna tutored to a National Amateur Championship.

Penna’s first tour victory was the 1933 Southeastern PGA. His first year was 1932 when he tied for the Cotton States Open, but lost in a playoff to Ted Longworth.

In 1938, Penna won the Kansas City Open. He was runner up in the 1940 Western Open. In 1947 he chalked up some of his best results. Penna won the Atlanta Open and finished second in the Los Angeles Open and the Colonial Invitation. He played in between 20 and 25 tour events through 1949.

Toney was a good player, a better teacher and a top-notch designer and club maker.